No clubs have given permission to be listed for this region.

Know of a school or community group that would like to start a TAME Club in the Capital Area? Club and Student Registration starts in Early August!

TAME Clubs are free! You don’t need to be a teacher, librarian, or STEM professional to register a TAME Club. You need an adult, 6 students in grades K-12, and to meet regularly in person or virtually to do something (anything!) STEM-related. You can register scout troops, homeschool groups, NSBE Jr. clubs, and others with TAME, too! Sign up today.

Check the Competition Schedules and Results page for the latest information about the Capital Area Divisional STEM Competition!

TAME looks forward to a return to in-person STEM Competitions. However, we understand that conditions can change, and we will continue to monitor the situation.

Questions about the TAME State STEM Competition? Check the FAQ!

TAME Chapters have been hosting competitions since the mid-1980s and other events since 1976.
For records and photographs prior to 2015, please contact the TAME State Office.

TAME History in the Austin Area

One year after TAME’s founding in 1976, an article, “TAME Boosts Minority Students Into the Engineering Field,” appeared in Austin Magazine highlighting the efforts of local Austin industry and educational professionals to bring more students into engineering, science, and mathematics. The article was reprinted in TAME’s 1977 Annual Report. 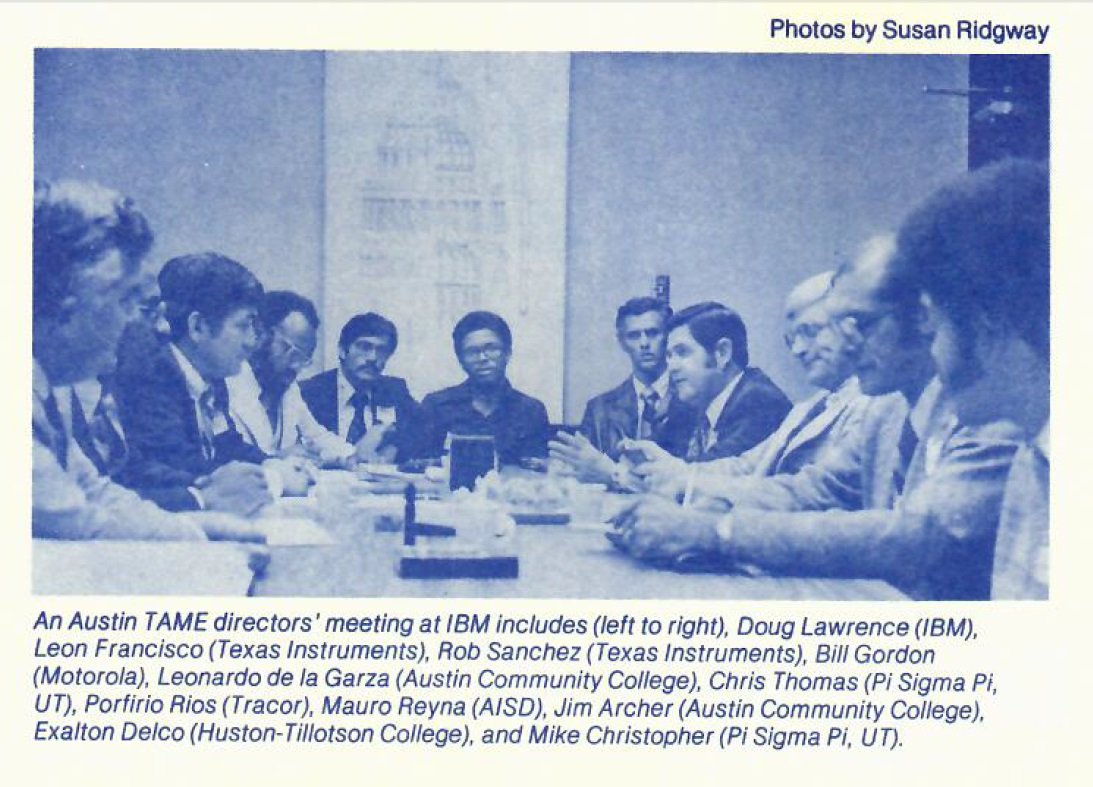 The Austin Chapter of TAME was easiest to organize; there was the greatest professional commitment here. The heavy involvement of industry is making TAME work,” John. S. Robottom, Executive Director of TAME said.

…According to Mauro Reyna, assistant superintendent of the AISD and vice chairman of Austin TAME, the program will be expanded this summer, which “shows that all our time and energy is paying off.” Doug Lawrence, personnel manager at IBM, is chairman of the Austin division of TAME. And he points out that Gus Garcia, then school board chairman, was one of the original organizers. Garcia was instrumental in establishing TAME with the AISD.

…TAME is an Austin partnership that is working to help solve two national problems–tapping the unused but valuable resource of minority engineering potential and opening up engineering and leadership positions to minority citizens.

And if the TAME enthusiasm and determination plus favorable student response are any indication, it’s a partnership that is headed for success. 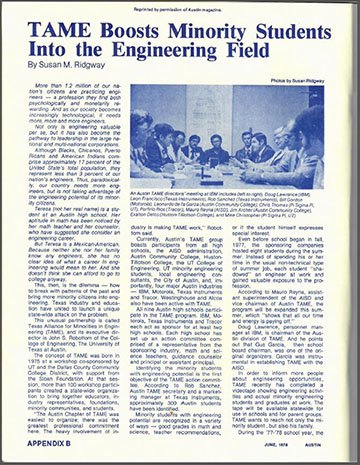 TAME is currently seeking local educators and administrators interested in volunteering in leadership positions in this area. Please contact us at programs@tame.org if you know someone for this role.