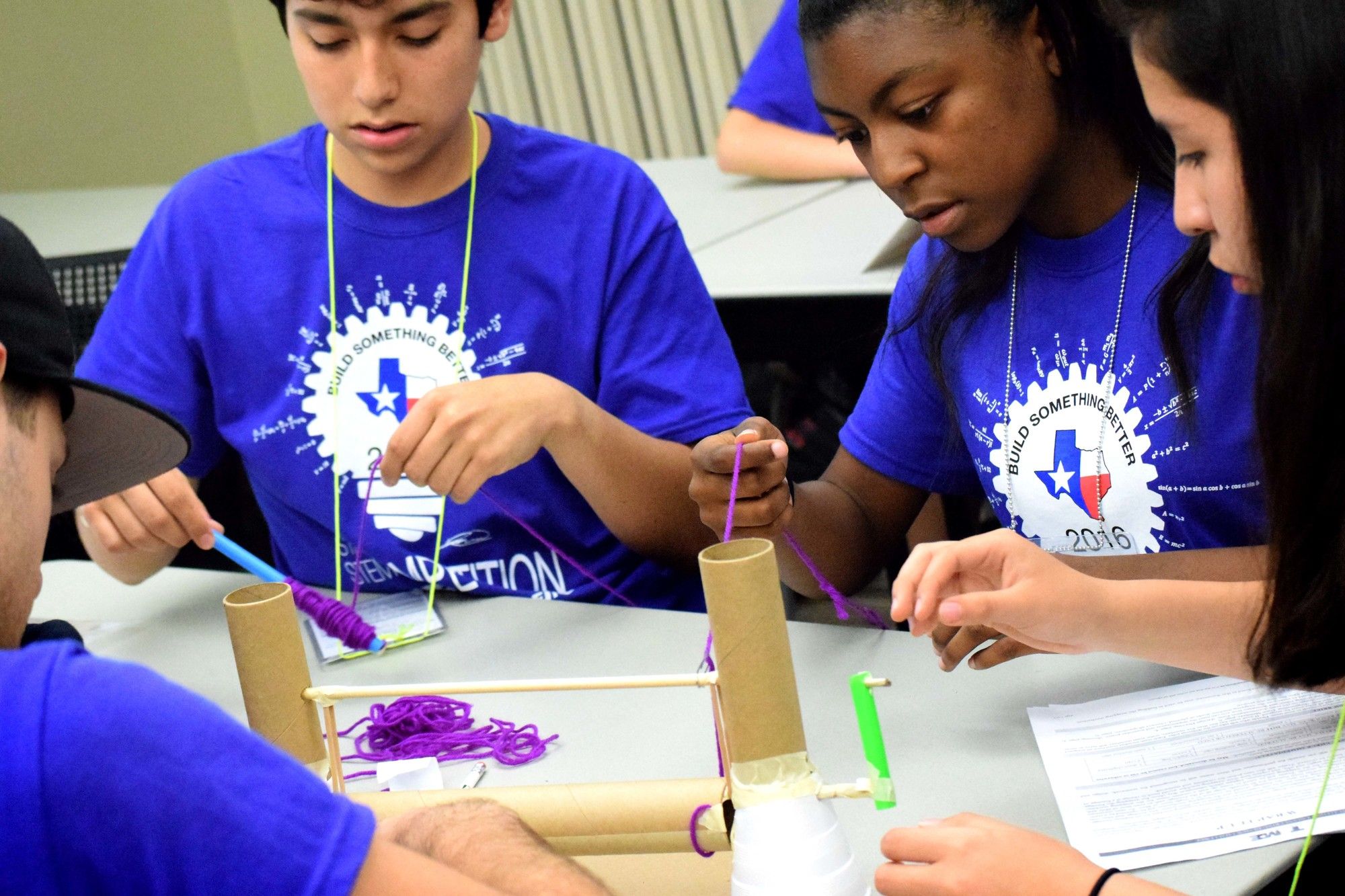 (San Antonio, TX) – The 31st annual State STEM Competition for the Texas Alliance for Minorities in Engineering (TAME) was sponsored by Boeing and held at the Texas A&M University-San Antonio campus on Saturday, April 30, 2016.

The event, offered free of cost to participants, brought together 283 high-achieving students from across Texas, who traveled 7,174 miles to compete. TAME students from grades 6-12 qualified to attend the State STEM Competition at Divisional events hosted by the Chapters. This year’s Divisional STEM Competition season saw a record-breaking number of participants—1,548 students competing across 13 different chapters. View Divisional results here.

At the State level, students competed in individual, timed math and science tests and in teams for an engineering design challenge. The top five students in each test received awards. The top five teams in the engineering design challenge were also recognized. In addition, three teams received special awards for design, creativity and teamwork. All winners were honored with trophies or medals and all participants received a variety of door prizes and giveaways thanks to generous sponsorships. View State results here.

One student, Lily Hernandez of the Lubbock Chapter, received the Outstanding Student Award sponsored by Shell Oil Company. Another student, Eunsuh Cho of the Capital Area Chapter, received recognition and $100 for winning the Boeing “Build Something Better” T-Shirt Design Contest. 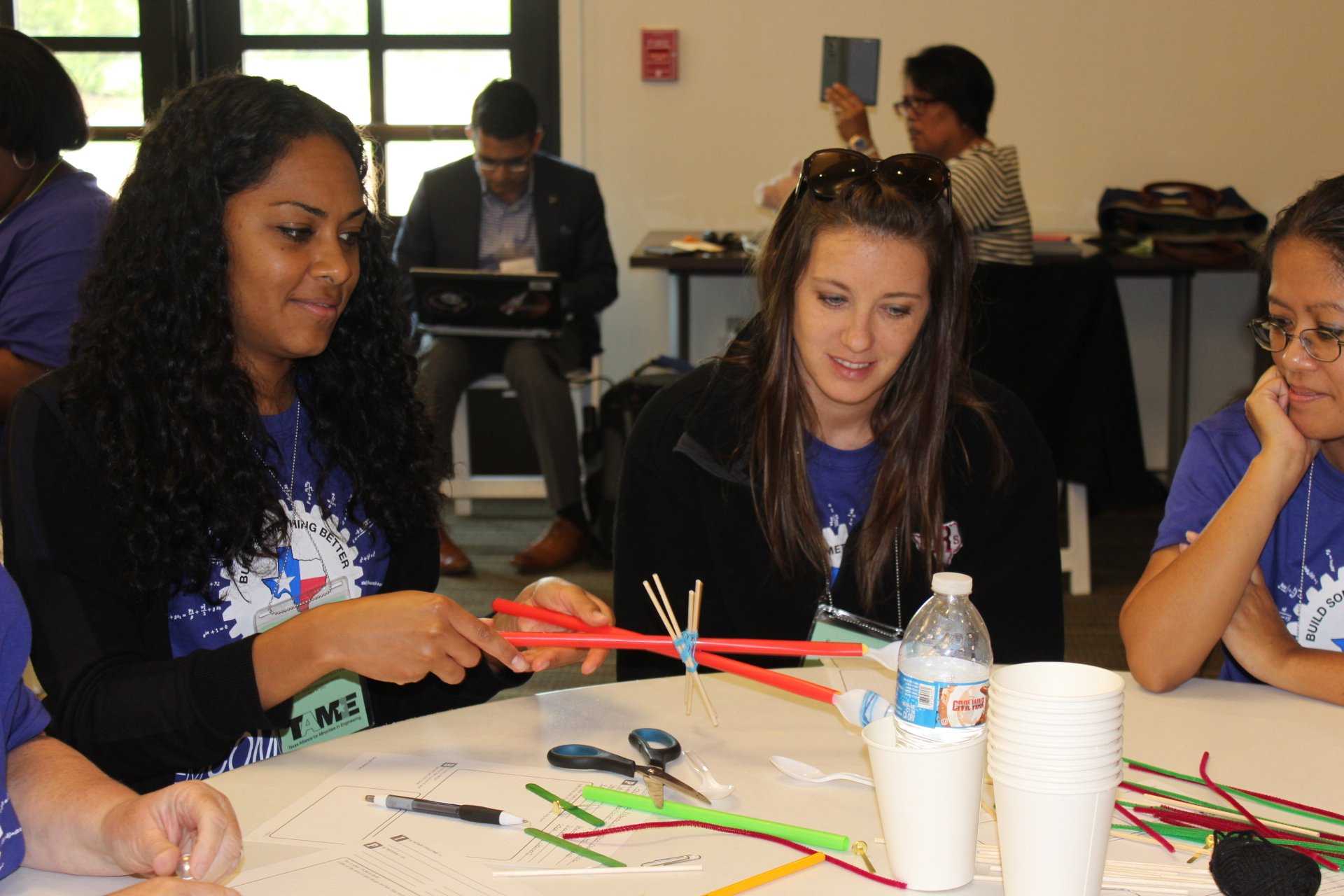 While students competed in math and science, TAME teachers, volunteers, and adult chaperones came together for professional development in an Educator Workshop presented by Iridescent, the makers of Curiosity Machine. The workshop offered educators useful strategies on how to bring engineering concepts into the classroom, club, and home. See photos. 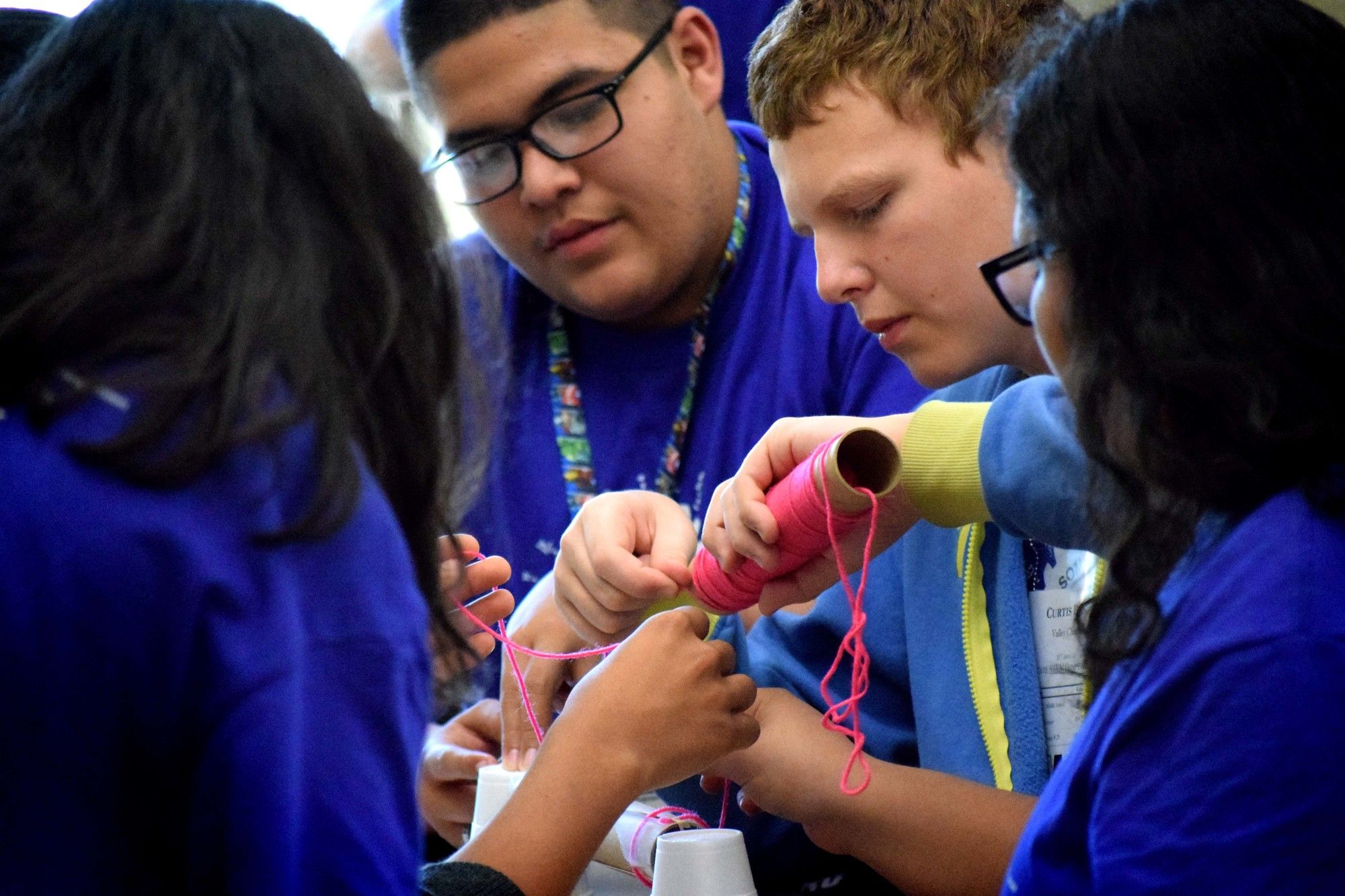 When it came time for students to take their turn at “building something better,” the excitement was high. The 2016 State Engineering Design Challenge was designed by engineers from Boeing and Iridescent. Students were grouped into 59 diverse teams to take on the roles of engineers and solve real-world problems with creativity and teamwork. See photos.

This year’s challenge was inspired by Boeing’s 787 Dreamliner, and the mechanism needed to wrap the fuselage with lightweight composite materials like carbon fiber. Students had an hour to design, build, and test a self-supported wrapping machine that could cover a fuselage with a single layer of fiber—with no gaps or overlapping strands.

Students stepped eagerly into five official roles like System Engineer, Structural Engineer, and Production Engineer. Then they rose to the occasion, creating such a wide range of prototypes that one even needed to be taped to the wall. Groups took names like “The Craftsmen,” and “Self Supportive Group of Talented Engineers,” and named their creations with clever titles like “Boeingian Rhapsody.”

Participants often discover that teaming up other like-minded students during the challenge leaves them with a sense of purpose and belonging. When asked what her favorite part of the day was, one student chose the Engineering Design Challenge and wrote, “Joining with students from other places and working towards a common goal.”

Tony Castilleja, Jr., keynote speaker and engineer from Boeing, was so impressed that he took photos of the prototypes and texted them directly to the professionals at Boeing who designed the real wrapping machines for the 787 Dreamliner. “Future designers of Automated Fiber Placement robots for composite structures – they are working together and making progress,” he wrote. “I’ll want to hire a team by the end of the day.” 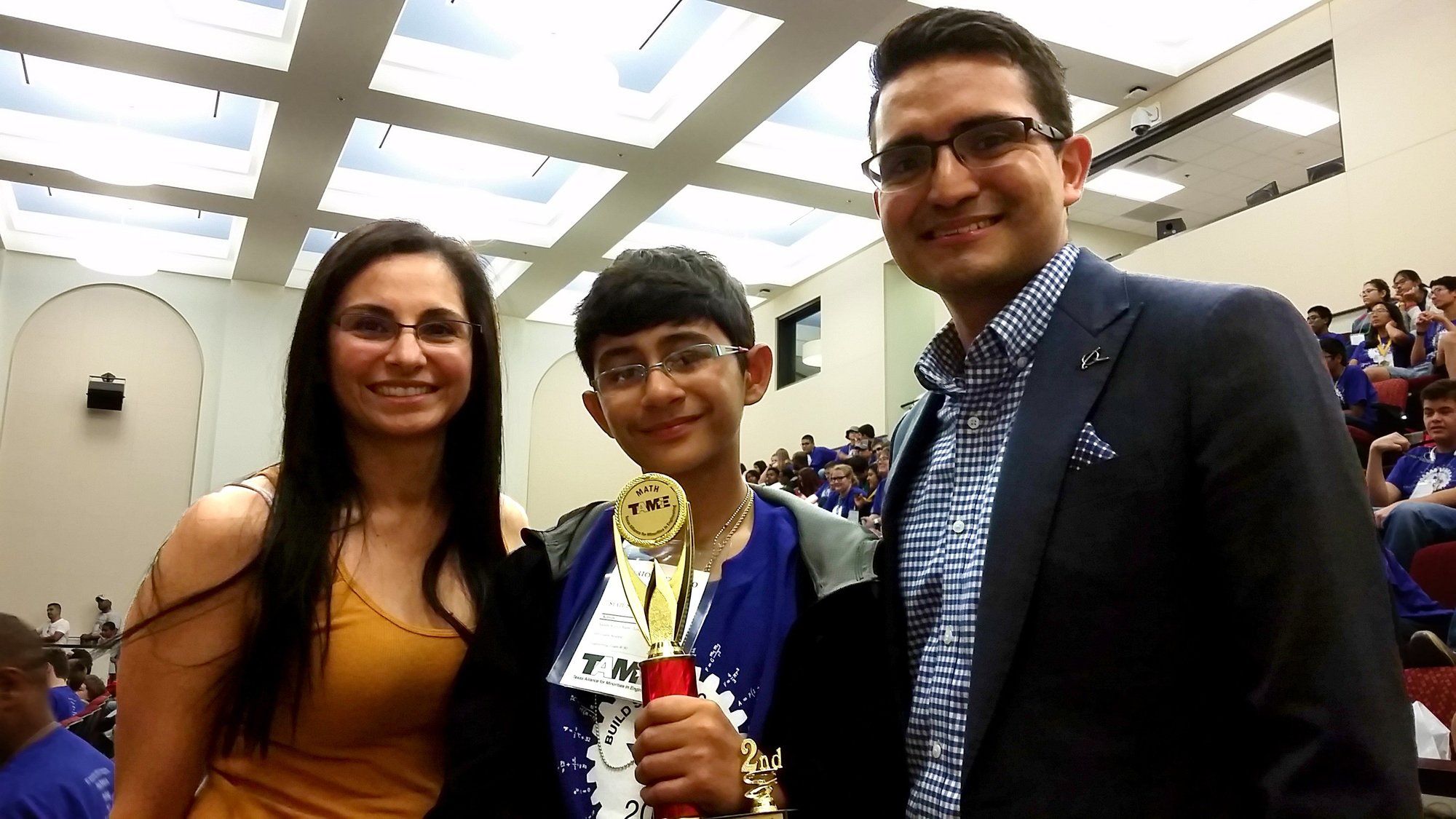 The key to success is education

“I am an engineer—and so are you.” When Castilleja took the stage for his keynote speech, he hoped to share “just how great our teams are as we work together to build the future of flight.” A hush fell over the auditorium as students, some still holding their prototypes, leaned forward and listened to how a student from Baytown, Texas became an engineer dreaming of spaceflight.

Castilleja shared his experience as a first-generation Hispanic engineer who has done incredible work with the Boeing CST-100, the first reusable spacecraft designed for travel to the International Space Station. He spoke passionately about his mother’s motto, “La llave del éxito es la Educación,” or “The key to success is education.”

Perhaps just as importantly, Castilleja provided practical steps for students to follow in his footsteps. His “High School Guide” provided clear tracks for math (Algebra, Geometry, Pre-Calculus, and Calculus) and for science (Integrated Physics and Chemistry, Biology, Chemistry, Physics) with an extracurricular track (Robotics, Science Club, English AP, Sports, Music).  “The math was difficult, the balancing of school and family were difficult,” he admitted, “but mentors were critical to that success.”
Encouraging students to collaborate and ask for help, he pointed out the sheer number of brilliant minds working alongside him at Boeing, and his gratitude that he could always turn to his team with questions. “But you have to ask for that help,” he said. “Boeing paid for 100% of my Masters—because I asked. They’re investing in your mind.”
He shared his conviction that the young scientists and engineers in the room would take humanity to Mars and beyond. “Let’s get more future engineers to build Texas, build America, and get us faster and farther in air and space!”

Students and teachers alike were awed by the stories and videos Castilleja shared. “Such an inspiring talk about going to Mars for TAME,” tweeted Jennifer Barnett, a teacher from TAME’s Capital Area Chapter. “I want to sign up!!”

“Students jumped to their feet when he finished,” said TAME Program Coordinator Lindsey Carmichael. “He’s a natural mentor. You could tell he had such respect for all 300 students in that room.” Carmichael said her favorite moment of the event came during the Awards Ceremony, when a student approached Castilleja with trophy in hand.
“He was a middle schooler from our brand new TAME Chapter in the Valley, Mario Elizondo. He said, ‘Mr. Castilleja? Can I have a photo? It would mean a lot…’ I don’t think I’ll ever forget the look on his face when Tony congratulated him on his 2nd place and told him to keep working hard, then said something encouraging to his mother in Spanish. They both looked like they were going to burst from excitement.”
TAME discovered Castilleja in a video for Iridescent’s Curiosity Machine, in which he shares the childhood story of how his aunt woke him up on a nighttime road trip to watch the Space Shuttle launch over the Gulf of Mexico. Carmichael says when she looked up a feature on Castilleja, she was most struck by his work in co-founding the DREAM mentorship program for students in STEM, and the difference he has made for others.
Connecting professionals like Castilleja with students like Elizondo is what TAME has been doing since 1976, says Carmichael. “TAME is all about connection and support. When I think about my work recruiting teachers and students in the Valley last summer, and my hunch that the engineer in that video would be the right person to talk to our students… I think about all the time and energy and dedication of the people, universities, and companies who worked with TAME to make this event possible. Without TAME, that moment between Mario and Tony probably wouldn’t have happened. And who knows? Maybe someday when he’s designing the engine that will take people to Mars, Mario will think back to the day he first got to feel what it’s like to be an engineer. To the day he got to shake the hand of a role model who looked him right in the eye and believed in him.”

“I’m so grateful that the work we do allows us to really make a difference in young peoples’ lives,” she said. “I get a little teary-eyed, looking at that photo and how much it seemed to mean to Mario and his mother, and even to Tony. Who wouldn’t be proud to be a part of TAME?” 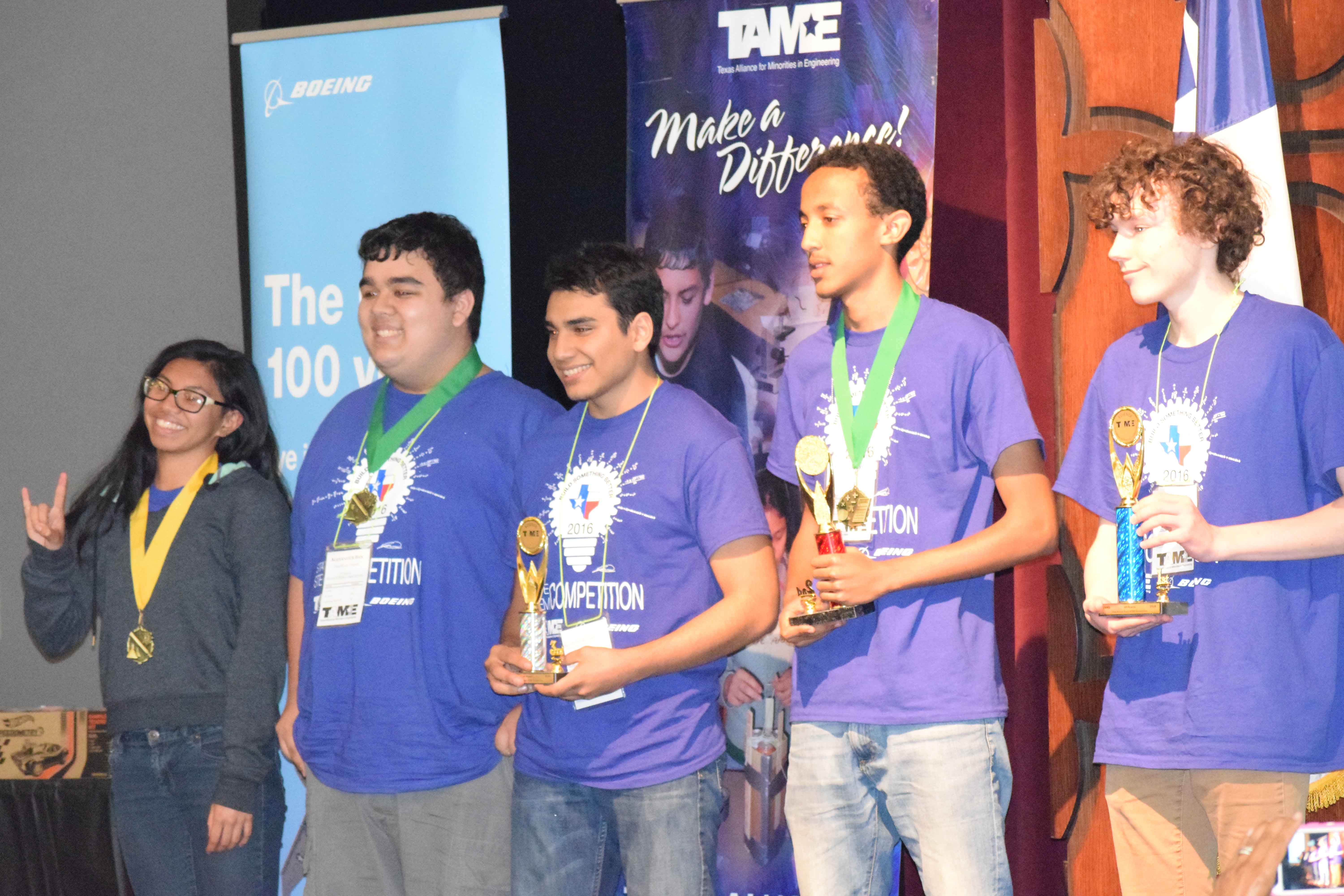 “This is the best day of my life!” whispered one student to a volunteer, before walking onstage to claim his trophy.

Full results from the Awards Ceremony can be found here, and photographs of each winner are featured in an album on TAME’s Facebook Page here. 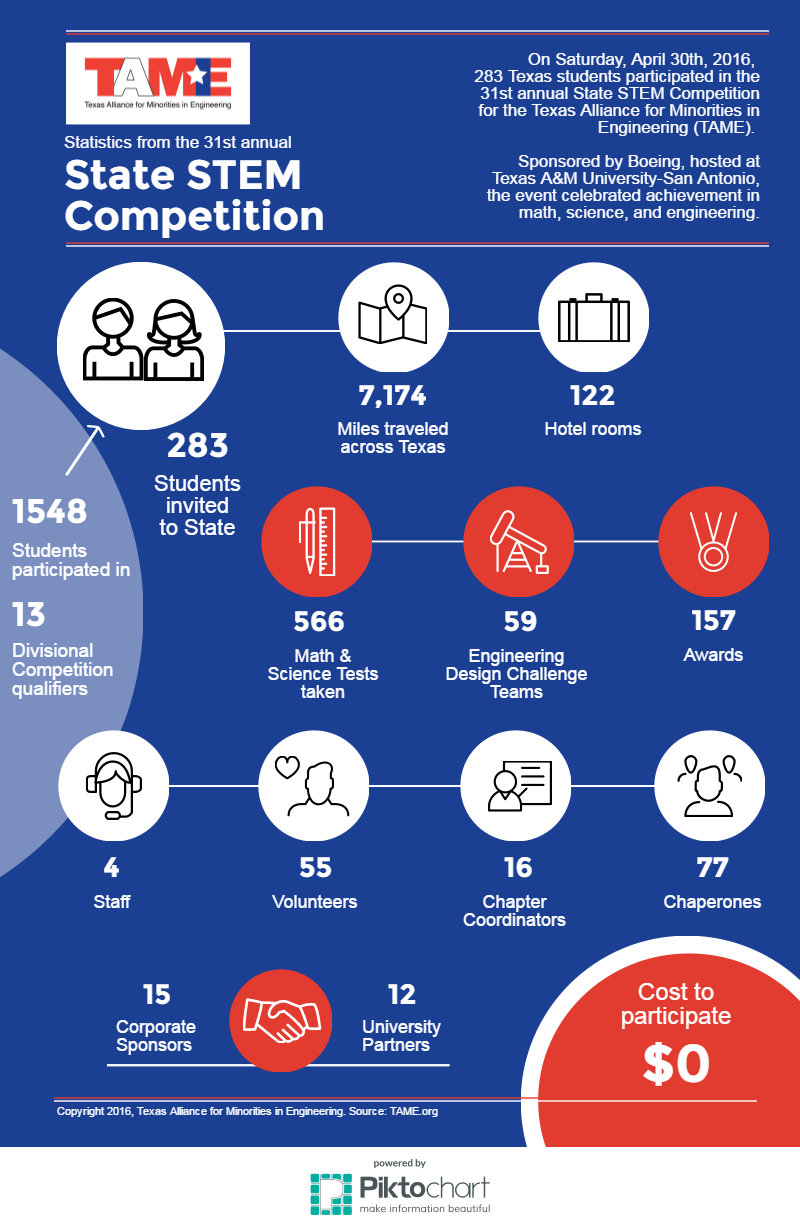 Thanks to those who made it possible

TAME would like to thank the following volunteer photographers for sharing their time and skills in capturing the events of the day: Aurelina Prado, an employee of Boeing; Jeremy Donald of Trinity University; and Jose Serrato of the TAME Fort Worth Chapter; and Jason and Judy Dones of San Antonio City Wide NSBE Jr. Chapter.
TAME would like to extend heartfelt thanks to the following organizations for promoting diversity in STEM careers.
Presenting Sponsor:

Thank you for helping TAME build a workforce that looks like Texas. Join these organizations in making a difference on our Get Involved page.