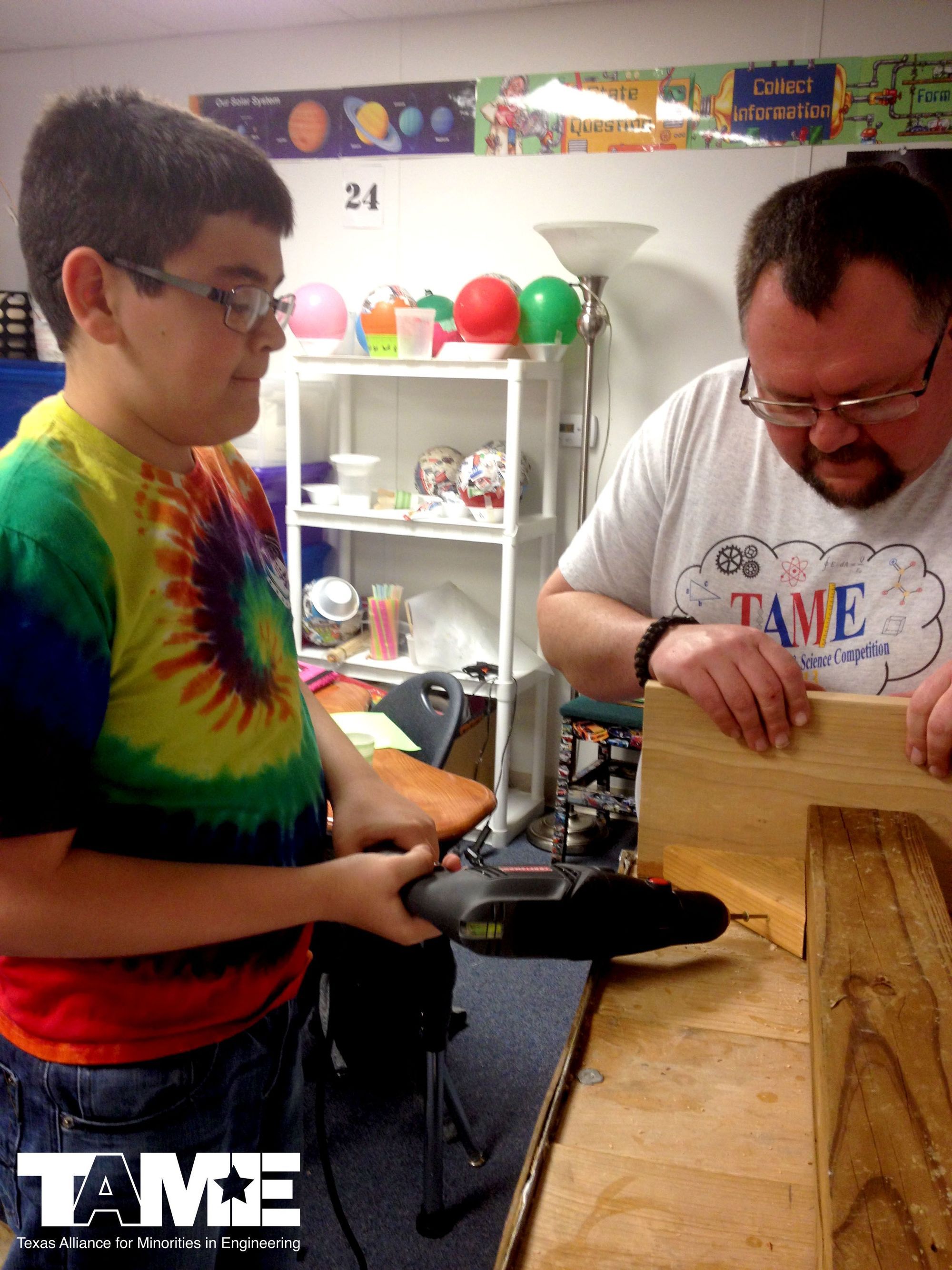 TAME Teacher and Alumnus Jeff Vann helps a student at UTPB Academy learn to use power tools in a class engineering project.

“I remember being in school and feeling like there was a stigma on the smart kids. Even now, kids feel like it’s not okay to be the smart kid in the class, or that there’s not a reason to excel. TAME programs show kids that it’s okay to be smart, and that you get to do cool stuff when you’re a smart kid.”

Jeff Vann is a TAME Alumnus and Teacher who brings science and engineering to students at the UTPB STEM Academy in TAME’s West Texas Chapter.  His TAME Club students are known as the Noisy Nerdles.

Let’s start with the big question: why the Noisy Nerdles?

That’s what the students call themselves.  There’s a Ninja Turtles theme.  We call the classroom the SEWER, which stands for “Studying Every (day) With Extreme Rigor.” It’s kind of a geek classroom.

What goes on in the SEWER?

It’s a cross between shop class and a science lab.  I was a teacher for eleven years before I came here and I never dreamed I could have power tools in my classroom.  This school is really different.  I hope we can grow to be something that other schools are inspired by.  I see my students grow in a way that I always want to see, and it’s because of this new learning process.  We do project-based learning for four hours a day, and then each kid has an iPad that they use to do lectures and worksheets on their own.  They can do that work from anywhere, and the teachers can monitor.

I work with other teachers to reinforce core concepts through science lessons.  With the R2D2 engineering project that our TAME Club designed for May 4th, our team was struggling with ratios and fractions, and when I found these old domes, I thought I’d do a skill-building workshop about ratios.  That project started by asking, how big would R2D2 be if we used these domes for his head?  How would we figure that out?  And then it turned out he was going to be 6’ tall, and then we started talking about how we would build it, and then the students really took off with it.  The students’ conversations were really cool, about different materials’ strength and why old rebar would or wouldn’t work.  I have a group that wants to build a C3P0 to go alongside.

How did you get involved with TAME?

I went to high school at Permian High School in Odessa.  We had a TAME club there that was run by a geometry teacher, and I went to the engineering contests, like the rat trap catapult and the egg drop.  Those were a lot of fun.  I went on to be a science teacher and wasn’t involved with TAME until eight or nine years ago, when I got an email about regional competitions.  I put together a TAME club to practice the engineering challenges and we went.

At the time, I was teaching at Noel Elementary in Odessa. The TAME club at Noel allowed me to work with the kids in a way that I just knew was a better way.  That’s why when UTPB was starting up the STEM Academy, they asked me to come there.  (Jeff made headlines there in 2006 with a peer-to-peer teaching plan. Read more here.)

Your TAME club students famously conducted an Engineering Design Competition for the younger students at Noel.  Can you talk about how that worked?

At that time, Noel Elementary was K-6th grade.  Our TAME Club was called NASA and was all 6th graders.  We practiced engineering challenges and went to the TAME Divisional Math and Science Competition (now known as STEM Competitions), which was held at Texas Tech.  Eventually we took six students to TAME’s State Competition, and when they came back they just infected everybody else, all twenty kids in the club, with how excited they were.  By then we’d missed the deadlines for the next round of competitions, but the kids were just buzzing.  A week later I was watching them at the AVID competitions, and I thought, it might be too late for this year, but we could hold our own competition and have the older kids put it on for the 3rd and 4th and 5th graders.  The principal of Noel said yes and the TAME state office said yes, so I pulled all the NASA TAME Club kids in.  I showed them a calendar and what we’d have to do to pull it off and the kids stepped in and met every deadline.

By then the 6th-graders had done a lot of engineering challenges, so they knew how it was supposed to run.  We did a Float the Boat Challenge where the kids had to build a boat with the materials we gave them.  I brought in an old aquarium where the kids could test two boats at once.  We gave them cardstock, Dixie cups, foil, masking tape, a bunch of materials in a gallon bag.  We only had one group ask if they could use the bag!

Just like at the Divisionals, we mixed up age groups and gender and put 4-5 kids on a team.  They were scored on how well the team worked together, on the originality and strength of the design, and on how many pennies the boat could hold before sinking. It was a really neat deal.  We held it for the next three years.

And the 6th-graders ran the show?

The 6th-graders ran every aspect.  The teachers just monitored.  The kids came up with the tests, proctored, scored, everything.

What advice do you have for teachers who want to replicate the challenge?

Why do you think TAME programs like the STEM Competitions work?

It’s the skill-building, the teamwork, the practice.  I always tell my kids, the important thing is not how well you do on the test.  It’s how much work you put into it.

I remember being in school and feeling like there was a stigma on the smart kids.  Even now, kids feel like it’s not okay to be the smart kid in the class, or that there’s not a reason to excel.  TAME programs show kids that it’s okay to be smart, and that you get to do cool stuff when you’re a smart kid.

I had one student who was kind of a troublemaker.  Her brother brought her to the TAME club. She was smart, but she was just scraping by. She wanted to join the competition team, and when I told her she really had to work hard for it and stop being disruptive, she cried.  She ended up going to Divisionals and winning 3rd place in math.  She’d almost failed 6th grade because of math.  She told me when she got back that she was hanging out with these cool girls who had college plans, and she had never thought she could go to college, but now she did.

What’s next for the Noisy Nerdles?

Being on a college campus is great – we have access to a lot of opportunities. We just did a tour of the biology lab, and we also have the art department where we can fire pots.  UTPB is putting in a FabLab this year, so we’ll have a 3-D printer.  And this year we’re starting robotics.  I hope to get a TAME club started up for the middle and high school students.   And we’re still looking for a cool name.